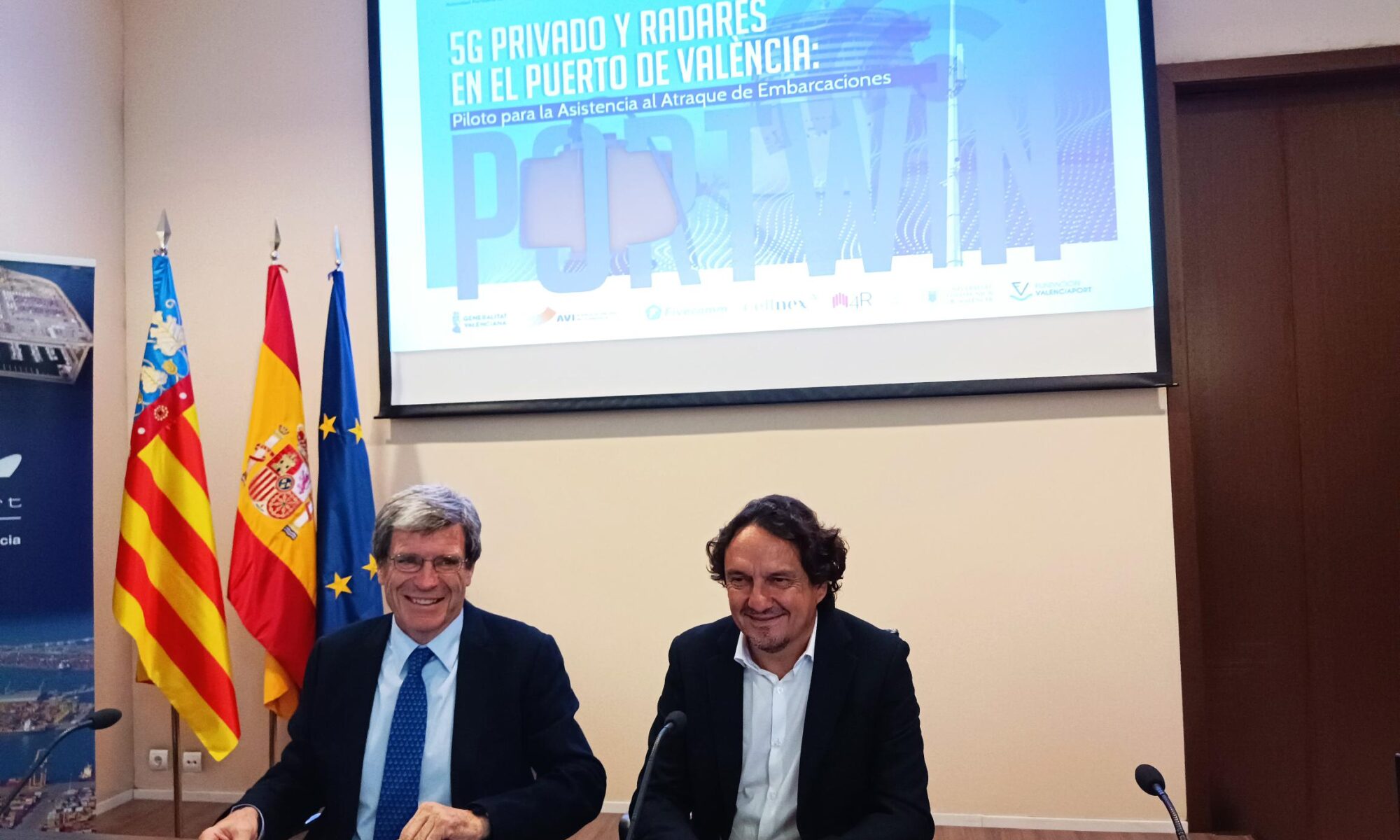 The President of the Valencia Port Authority (PAV), Aurelio Martínez, assures that “actions in the field of R + D + i are crucial for the long-term success of port areas to attract talent, increase sustainability and create wealth.”

Aurelio Martinez: “Valenciaport plays a fundamental role in the unlimited opening to innovation”

The PORTWIN project to transform the Port of Valencia into the first logistics port environment that helps ships dock in real time with technologies such as 5G, radar, edge computing and artificial intelligence was unveiled today.

PORTWIN, led by the startup Fivecomm with the support of the Valencian Innovation Agency, collaborates with PAV, Cellnex, Valenciaport Foundation, Universitat Politècnica de València and A4Radar

The pilot was tested at Cruise 1 Pier, located in the northern extension.

Valencia, October 20, 2022.- The Port of Valencia is the first Spanish port to test 5G technology for ship docking operations. The president of the Port Authority of Valencia (APV), Aurelio Martínez, stressed the role that Valenciaport plays “in the unlimited opening to innovation, as it has been in the past, as a gateway that has been the winds of change and the generation of wealth.” The head of Valenciaport took part in the PORTWIN event “Private 5G and Radars in the Port of Valencia: A Pilot to Help Moor Ships”, a solution based on 5G technology to help in real-time decision-making and improve the security of these operations.

Aurelio Martínez explained that “in Valencia we are fortunate to have a large port that is committed to innovation to create value around innovation. We are a port that has managed to attract key national and international customers to call for operational excellence, for our infrastructures, and for a strong commitment to innovation.” During his speech, the head of Valenciaport listed some of the initiatives that PAV has developed in recent years, such as the creation of port community systems, the Valenciaport Foundation or the promotion of the Foundation 4.0 to help ideas and projects. Starting up. In addition, the projects of the new northern terminal and passenger terminal contain a very high degree of digitalization. But innovations have also been applied to sustainable projects such as Green C Ports for sensory and intelligent management to increase the connectivity of ports with the city and reduce the impact of port operations in it.

The PAV President explained that as a result of this commitment to innovation, the Digital Transformation Committee decided to introduce 5G technology in areas where this technology can provide greater value, such as terminals, or in pilot development, such as PORTWIN.

According to Aurelio Martínez, “Ports are also dynamics of the logistics port community and product structure, and we must promote innovative value-added services in collaboration with private initiative. An action that will improve areas such as training, quality, efficiency, sustainability, monitoring the environmental impact of our operations, intermodality or support for logistics centres, among others.”

The event was also attended by Cellnex Spain CEO Albert Quatrecasas, Fivecomm CEO Hector Donat and Valenciaport Foundation CEO Antonio Torregrosa. Albert Quatrecas stressed that “the port of Valencia is the first to use private 5G in Spain, with the help of this technology it will reduce costs, time, complexity and increase the safety of mooring operations.” In the same line, Hector Donat pointed to the port’s “great potential in digitalization and in the use of private 5G to make the enclosures more sustainable.”

This initiative was born out of Valenciaport’s commitment to digitalisation and innovation as key elements to maintain its competitiveness. The project, which is co-financed by the Valencian Innovation Agency, combines advanced technologies such as 5G, Edge Computing, Artificial Intelligence and Radar to digitize the operation of mooring vessels. providing real-time assistance with highly accurate data from any vessel approaching the facilities of the Port of Valencia.

The solution developed at PORTWIN, based on 5G intelligent radars, facilitates this mooring process by transmitting in real time the distance, speed and orientation of vessels in relation to the mooring dock. This informationI am obtained using radar, transmitted via 5G technology, processed at the edge, and presented in an application that, thanks to its graphical interface, allows you to visualize the position and distance of the vessel relative to docking in real time from any device.

Through the use of this application, the captain, tugs, pilots and berths can know the position of the vessel with millimeter accuracy throughout the docking stage, allowing for more efficient decision-making, which contributes to the optimization of operations and increases efficiency and safety in this complex process.

Today’s event presented the result of the implementation of the northern expansion of the sensorization layer of the infrastructure at Cruceros 1 dock to monitor the process of mooring assistance, which will help in real-time decision-making, increasing the safety of said operation, all of them based on 5G technology.

The project was presented by the technology company Fivecomm, whose technology partners are Cellnex, A4Radar, Fundación Valenciaport and PAV. In doing so, Valenciaport carried out a controlled transfer of space at the Cruceros dock, computer facilities at the foot of the dock and provided power to the pilot, assisting the digital transformation department and the electrical service.